Linda Chung Admits She is Married; Husband is Chiropractor

By jingles on February 24, 2016 in Celebrity Weddings, Hot Gossip!, NEWS 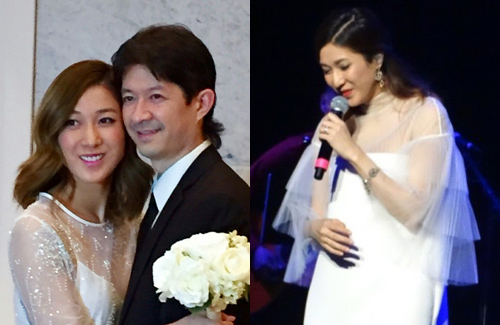 After reports surfaced that Linda Chung (鍾嘉欣) may have a shotgun wedding due to an unplanned pregnancy, the 31-year-old announced that she has been in fact married since fall 2015. The wedding banquet will take place on February 27 in Vancouver. While Linda remained silent on her pregnancy rumors, many speculate she is already five months pregnant as she is beginning to show a belly bulge.

Jeremy and Linda dated for about a year before he proposed to her. He is a very tolerant boyfriend who often gives in to Linda, and has successfully won the approval of Linda’s parents.

Broke Up with Philip Ng

Apart from rejecting Raymond Lam‘s (林峯) pursuit in her early career, Linda has only been involved with one other celebrity, martial arts star Philip Ng (伍允龍). Linda dated Philip for seven years but the relationship ended last year when Linda wanted to get married, but Philip had no such plans. Linda was so heartbroken that she flew back to Canada to recover from the breakup. That was when she subsequently met Jeremy.

“Today, I wish to announce that I’m getting married! Thank you, all my friends in the media who have always shown me a lot of concern. But those who know me well would know that I tend to keep my personal life low-profile. I have always wanted to protect my family members, who don’t belong in the entertainment industry, as best as I can. Just like all of you, I have also always wanted to set up my own family and lead a simple but content life.

“Thank you God, as I finally met him at the beginning of last year – my husband, Jeremy from Vancouver. We got to know each other and discovered that we both share the same [Christian] faith and similar values, and never run out of things to talk about. He is mature and loving, a devout man of God, and is also gentle and sweet to me.

“We fell in love and also received the support of our parents. Their hope is for us to settle down and start a family. I too wish to start a simple but blissful family with Jeremy.

“Finally, sometime in Autumn last year, Jeremy proposed to me. I said, ‘Yes’. I am certain that he is Mr. Right for me. At the end of last year, we had a simple but formal ceremony to register our marriage, witnessed by both sets of parents. With their blessings, we have also selected an auspicious date and will be holding a wedding banquet on February 27. We hope to celebrate our marriage with family and friends.

“I hope that in the future, I will be a good wife and good mother, and look after my husband and family well. As for other rumors, I will not be responding to them. Please allow me to preserve some space. At the appropriate time, I will be sure to share any good news I have with everyone.

“I must also thank all my good friends, Leanne, Eliza, Grace and Christine! It’s been tough on you girls for having kept my secret for so long! Thanks also to Ms. Virginia Lok (乐易玲) and the entire artiste management team at TVB for all their help in coordinating the logistics necessary for keeping my relationship under wraps. I would also like to thank all my friends who care for me, as well as friends in the media. Thank you for giving me so much love. I hope that you all will extend this love to Jeremy and help me protect him, as well as forgive him as he may not be well-versed in dealing with the media.

“Finally, I would like to thank God for allowing me to meet Jeremy. May God bless our marriage and bless each and every one of you with lots of joy and peace!”

This article is written by Jingles for JayneStars.com.

92 comments to Linda Chung Admits She is Married; Husband is Chiropractor

“Armed Reaction 2021” To Bring Joy to Viewers This Monday

Is Kaman Kong Preparing for Marriage?

Chen Yuqi, Zhao Lusi In Talks To Star In “Love When the Stars Fall”