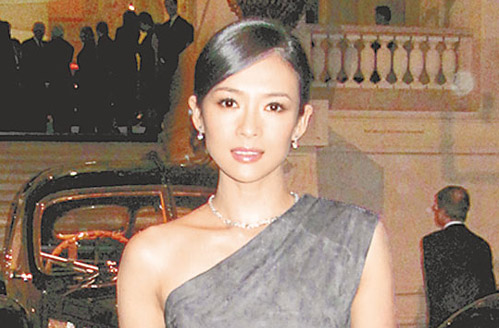 Zhang Ziyi and Michelle Yeoh appeared a special dinner for a luxury car exhibit at the Louvre Museum in Paris last night. In attendance was Jean Reno, the star of Leon: The Professional. Unexpectedly, Ziyi was more formidable than Jean, who portrayed an assassin in the film. Earlier, Ziyi contemplated suicide by hanging herself!

Michelle Yeoh attended the Louvre’s exhibit with her boyfriend, Ferrari President, Jean Todt. The Louvre held a special exhibit entitled, “Ralph Lauren’s Luxury Car Collection Exhibition.” Aside from admiring the luxury cars, Ziyi was warmly greeted by Ralph Lauren, who personally introduced her to his private collection to cars!

In the morning before the dinner, Ziyi went shopping in the St Germain district of Paris. Ziyi bought clothes and a handbag as Mother’s Day gifts for her mother. Although Ziyi was in wonderful spirits during her trip in Paris, she revealed in an earlier mainland interview that she had entered a dark period in her life and contemplated hanging herself!

Fortunately, Ziyi had the opportunity to portray Kam Kam in the film, Love for Life <最愛>, allowing her to distance from her suicidal tendency. “If I had continued to live in my own world, I would have proceeded to hang myself! However, Kam Kam saved my life! Living in her world, I experienced the twists and turns in the fate of life! ”

Jayne: I didn’t follow Zhang Ziyi’s news earlier. What happened to cause her to enter such a dark period in her life and contemplated suicide?!

58 comments to Zhang Ziyi Considered Suicide By Hanging Herself